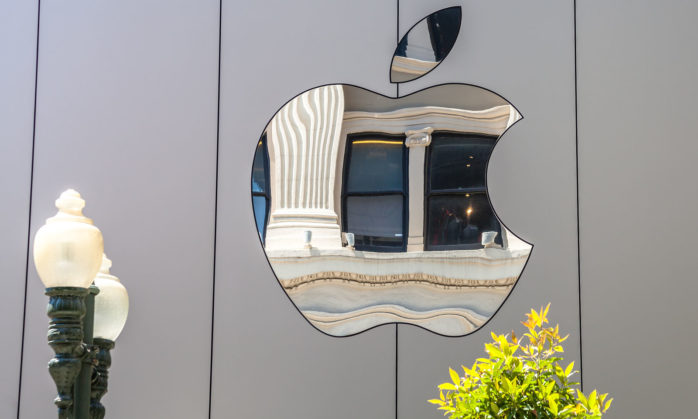 Starting Sept. 1, Apple’s Safari browser will no longer trust SSL/TLS leaf certificates with validity of more than 398 days. (This is the equivalent of a one-year certificate plus the renewal grace period.) Other types of SSL/TLS certs, including intermediates and roots, are unaffected.

Apple announced their unilateral decision at a face-to-face meeting of the CA/Browser Forum (CA/B Forum) on Feb. 19, which is the industry standards group that consists primarily of certificate authorities and several of the major browsers.

While there’s been no formal posting anywhere that we’ve found by Apple about this change, we were able to verify this information with some of our CA partners who were in the meeting. The good news is that this change doesn’t really come as a surprise, and the SSL industry is ready for it — so there won’t be any major impacts to customers or service providers.

So, what exactly has transpired here? And, more importantly, what does this all mean for you, the user or seller of SSL/TLS certificates?

Let’s hash it out.

Is Shorter Validity a Good Thing?

We knew it was only a matter of time before this type of initiative would occur. Last year, we wrote on how one-year certificate validity was back on the ballot of the CA/B Forum. The idea here is that the shorter an SSL/TLS leaf certificate’s validity period, the more secure the certificate is.

Last year, Google’s Ryan Sleevi introduced a ballot at the CA/B Forum that pushed for a maximum one-year validity for SSL/TLS certificates. The initiative ultimately failed, but it looks like Apple has picked up where Google left off in the fight for shorter validity.

Today, Tim Callan at Sectigo posted the following on his LinkedIn page: 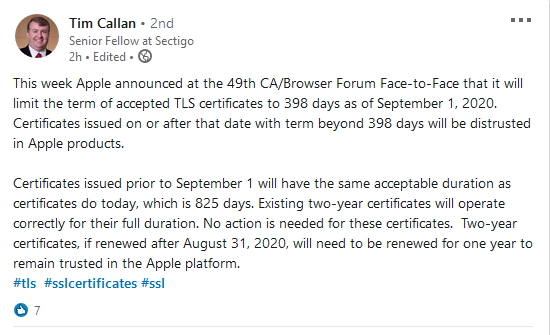 Honestly, we knew it was only a matter of time before this move would be made. We just figured it would have been Google or Mozilla making the first move. But, regardless of who made the first move, there are a few things you should know.

What Does This Mean for Your Website and Customers?

Safari is one of the internet’s two leading web browsers. W3Counter lists Safari’s browser market share at 17.7% as of January 2020. This falls behind only Google Chrome (58.2%) and ahead of Microsoft Internet Explorer and Edge (7.1%). So, as you can imagine, you want to ensure that your website — and your customers’ websites — are trusted by Safari.

What Site Admins Need to Know

Essentially, any SSL/TLS certificates issued prior to Sept. 1, 2020 are not affected by this change. They’ll remain valid (barring any unrelated certificate revocations) for the entire two-year period and won’t need to be modified or replaced. However, any certificates that are issued on or after Sept. 1 will need to be renewed every year to remain trusted by Safari.

What Certificate Resellers Need to Know

In a nutshell, you can continue issuing two-year certificates until Aug. 31, 2020 that your customers can use until they expire. Any certificates that you issue after that date, however, would need to be issued with one-year validity to remain valid as far as Safari is concerned.

This means that any two-year certificates that you sell will need to be re-issued after one year in order to continue being trusted by the browser.

Some CAs announced a new option for purchasing/implementing SSL. Sectigo rolled out their SSL subscription plan months ago and DigiCert will roll out their multi-year plans before September. With these multi-year subscription-based SSL services, webmasters can purchase coverage for longer periods and reissue their certificate as often as they need with the maximum allowed validity period.

There are a few benefits to this option:

So, basically, customers can purchase SSL coverage for an extended time period (for example, 5 years) and then just re-issue their certificate each year to update it —while saving money and time. That sounds like a win-win for everyone.


apple certificates safari ssl
How Can We Help You?