Thousands of Twitter users across the world are reporting problems connecting to the platform on both desktop and mobile devices.

While the Twitter API status page shows no issues for today, almost 55,000 users have reported over the past 30 minutes that that the service is not working.

At the time of writing, the browser version of the Twitter app is showing the typical “Something went wrong, but don’t fret — it’s not your fault” errors.

On mobile, the service shows the message “Oops, something went wrong. But don’t worry – it’s not your fault,” without providing more details. 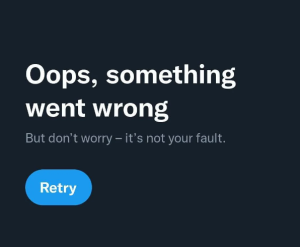 The issue behind the outage remains unclear at the moment but it is preventing users from retrieving or posting tweets, and problems logging back into their accounts.

For now, Twitter’s API Status page shows that all systems are operational. However, trying to reload the page takes much longer than normal. 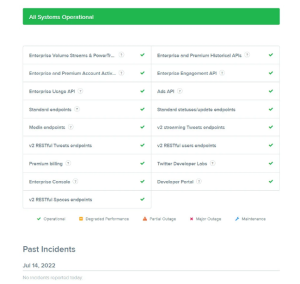 Update 1 [July 14, 09:09 EST]: Twitter’s API Status page has been updated to inform that a “possible outage” is under investigation.

The page shows degraded performance for multiple APIs, including endpoints for standard statuses or updates, the v2 streaming Tweets endpoints, and the standard endpoints responsible for searches, followers, user timelines, mentions, and trends.

Update 2 [July 14, 12:41 EST]: Twitter has confirmed a few minutes ago “some trouble with our internal systems,” which affected users across the globe. The issues have been fixed and the service should be running normally now. 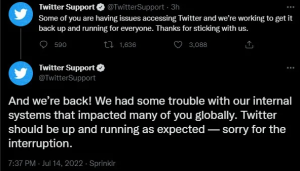 The current Twitter API Status has not added new details about the outage.

NOTE:: This article is copyright by bleepingcomputer.com and we are using it for educational or Information purpose only